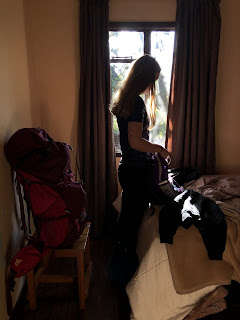 Day 2: Monday, February 17th, 2020 - Barberton Geotrail ⛏ Today was a cloudless and sunny day. We woke up and had sandwiches for breakfast. We looked at  Barberton Greenstone Belt, the Dwars River Heritage Site, and  Transvaal Supergroup. Stop 1: Msuali/Bulembu Asbestos mines located here. Typically asbestos mines are easier to remediate because there is no acid rock drainage. On the South African side of the Eswatini border the space that was once occupied by the asbestos mine has been revegetated and was overall reclaimed much better than the asbestos mine on the Eswatini side due to stricter regulations.  There we also saw vesicles on the inside of pillow lavas. Stop 2: Msauli Chert Black chert is carbon rich. C and S isotopes are lighter indicating biological activity. Chert with concoidal fractures. It is strong, sharp, and homogeneous. It was deposited slowly in a low energy, deep water environment. There were also pillow lavas indicating a deep
Post a Comment
Read more 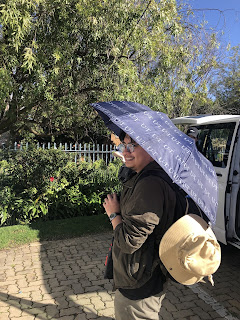 Day 1: Sunday, February 16th, 2020 - Barberton Today was our first official day in South Africa. After our breakfast in Johannesburg (Kempton Park) we drove to Barberton. Aflah and his umbrella. On the way we made a couple stops. Stop 1: Barberton Greenstone Belt and Archaean Granite Professors Dan Gregory and Xu Chu Our first stop was the contact between an archaean trondhjemite (3.4 Ga) and amphibolite (3.7 Ga). The amphibolite is fine grained and dark in colour and it's a lower member of the greenstone belt. The trondhjemite is low in potassium at the source region. 3.2 Ga the trondhjemite intruded the amphibolite at a subduction zone, and it is one of the oldest intrusive amphibolites. We shared the site with a couple of cows and jumped a stream to see the crosscutting relationship between the two rocks. Tr ondhjemite and amphibolite, hammer for scale. Tr ondhjemite and amphibolite. Stop 2: Granite 3.21 Ga We made a quick
Post a Comment
Read more 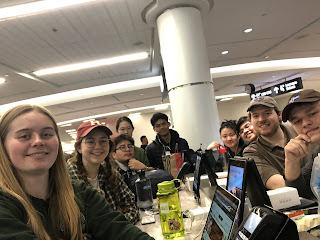 Day 0: Friday, February 14th - Saturday, February 15th, 2020 - Travel "Day" (AKA The Longest Commute Ever) Students waiting to board their flight at Pearson International Airport. Students from second year Petrology and fourth year Mineral Deposits met at the Union Pearson (UP) Express at 2 pm (Friday, Toronto time) where we headed to Toronto Pearson Airport Terminal 3 for our flight to Amsterdam. Amsterdam Airport view.   The flight from Toronto to Johannesburg is broken up into two parts. Part one is the six-and-a-bit hour flight to Amsterdam (a long flight) and the second part is the ten-and-a-small-eternity hour flight to Johannesburg (a looooooong flight). Plus we had a three hour layover in Amsterdam making our journey that much longer. Shoutout to Charly, one of our Earth Sciences professors, for telling us to try the cheese in Amsterdam, it was delicious! We finally arrived in Johannesburg at 10:30 pm local time on Saturday  (yeah, >24 hour commute,
Post a Comment
Read more